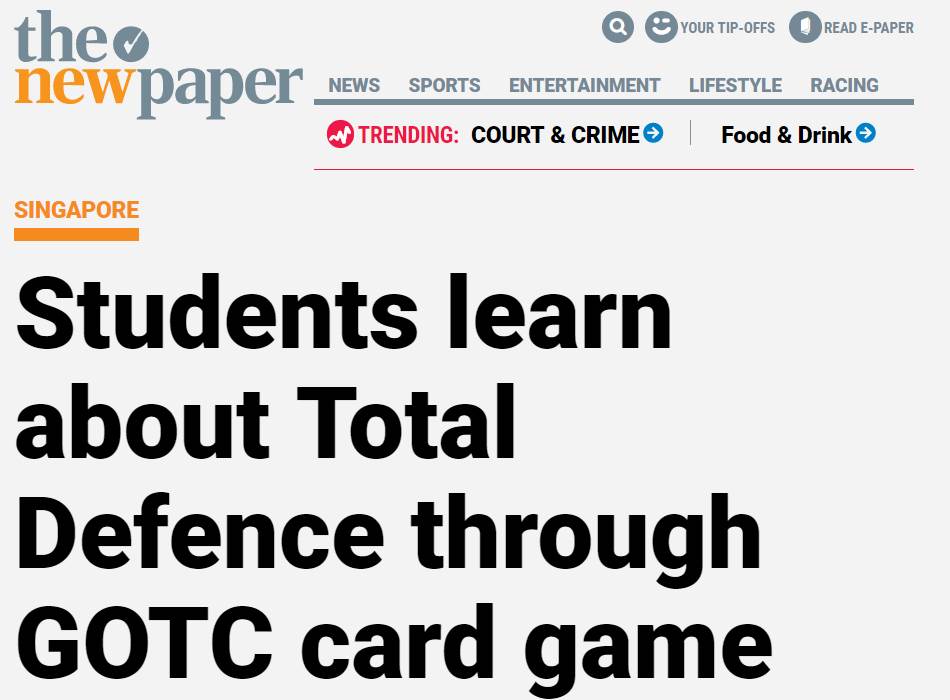 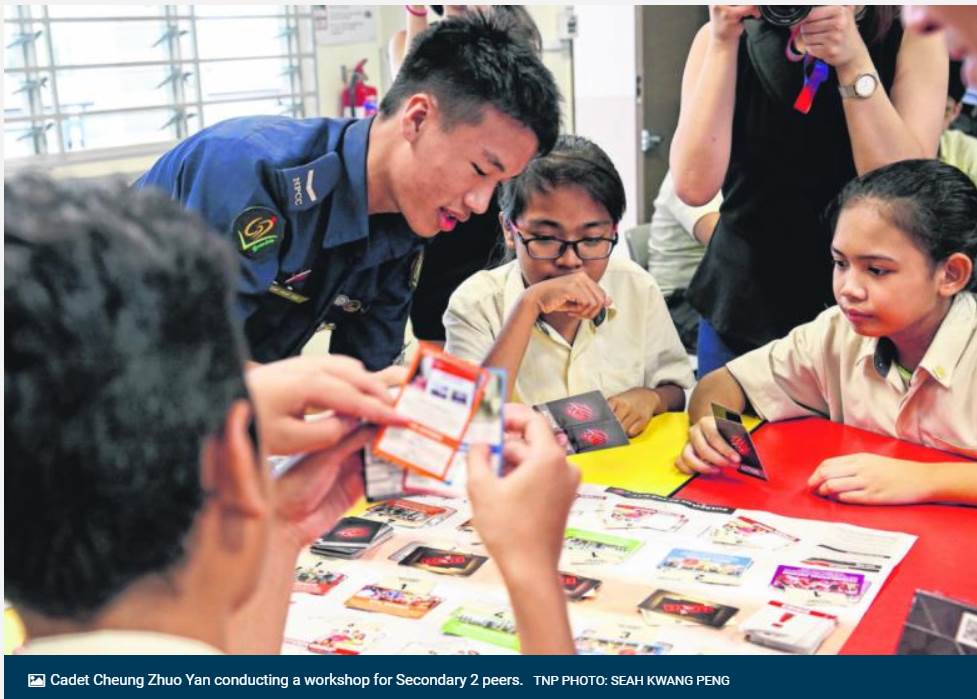 Secondary Two student Hilmy Ismail, 14, was excited as he played the Guardians of the City (GOTC) card game during a workshop in school. He was part of a group of students learning the 15-minute game under the tutelage of student facilitators from the uniformed groups . The workshop was held yesterday in Greendale Secondary School, with Secondary Three facilitators guiding their younger peers.

The card game was tried with the uniformed groups earlier.


Hilmy said: "I've learnt a lot by playing this game, as the events that they reference have happened before. It makes the whole experience feel more real." The GOTC strategy card game was officially launched last year, although its release was limited to students in the uniformed groups.

It was co-developed by Nexus and Mr Wan Junyan, 43. It aims to help young people recognise that the impact of terrorism is not confined to just physical acts. In doing so, it will also help them realise the importance of Total Defence, which is being celebrated today.

Mr Wan, a former civil servant, left his job to pursue passion projects. These include game design and writing.

He said: "I wanted to get students interested in the topic of defence. I feel that Singaporeans are too complacent with regard to our current security situation, so I wanted to give them a glimpse of possible threats we had to be concerned about.
"But most importantly, I wanted them to learn about what we can actually do as a nation."


In order to facilitate that line of thinking, 38,000 sets of GOTC were distributed to Sec 2 students islandwide. New blank "Action" cards were also introduced to allow students to design their own cards and showcase their interpretation of Total Defence. In addition to the workshop, a revamped Total Defence Programme for uniformed groups was also unveiled. 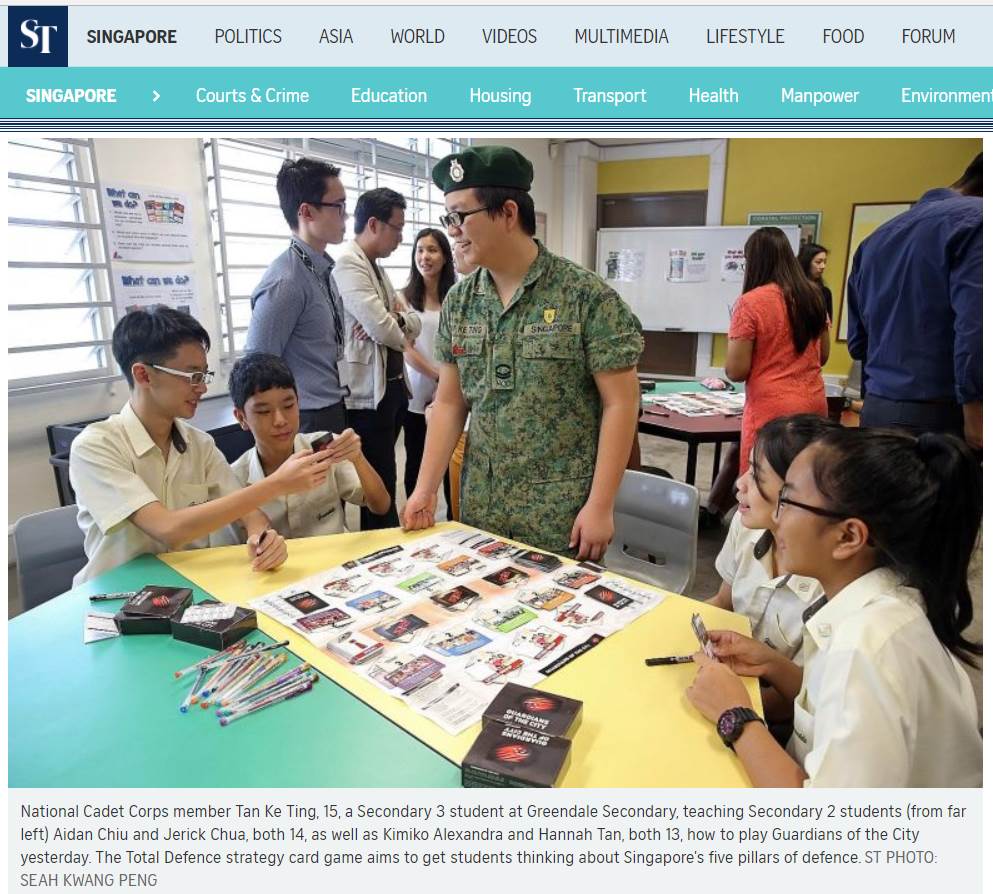 A video from lianhe zaobao
featuring my journey

游戏是他的天地：游戏卡设计师万俊彦
An interview in English, with Mandarin subtitles and narration
​Published online: 14 Feb 2018 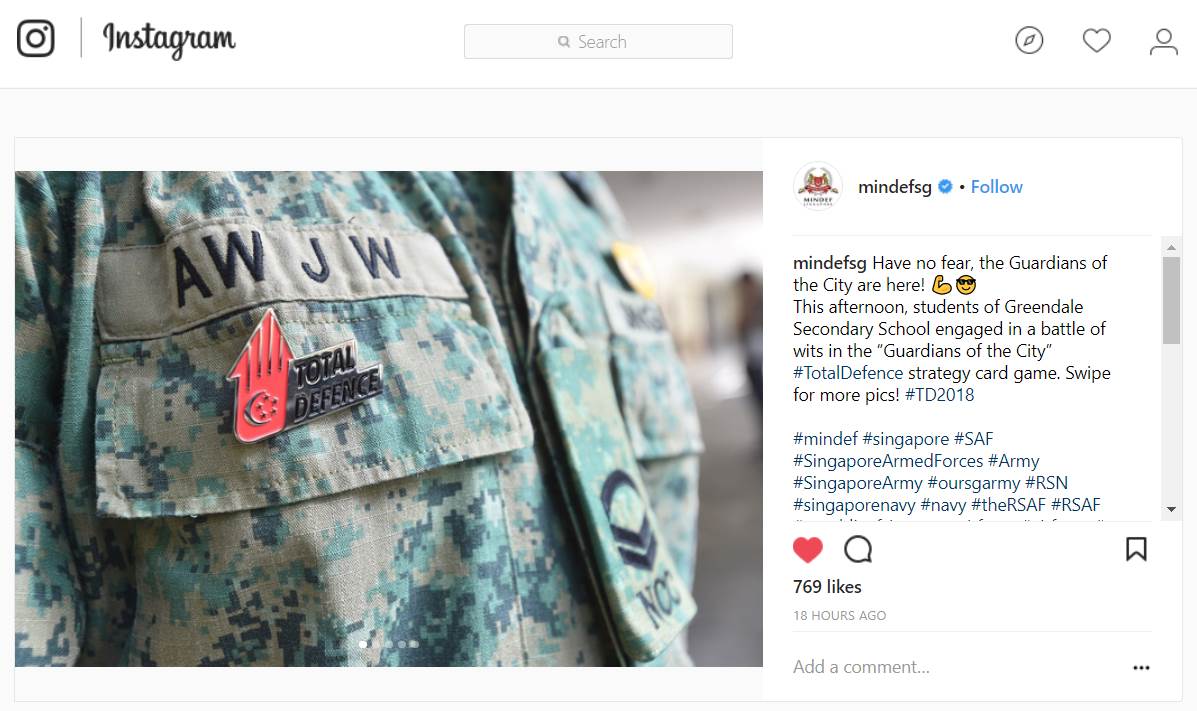 YET ​ANOTHER VERY POSITIVE REVIEW ABOUT THE IMPREGNABLE FORTRESS, THIS TIME FROM THE AUSTRALIAN TABLETOP GAMING NETWORK!
"The Battle of Singapore: Declared as the “worst disaster” in British military history by Winston Churchill. The Impregnable Fortress (a game based on the aforementioned battle, created by Falling Piano Games): Declared as the “most pleasantly surprising” game of 2017 by Me."

ANOTHER GAME REVIEW ABOUT THE IMPREGNABLE FORTRESS
Here's another game review from Hiew Chok Sien, a respected Malaysian board game blogger:
https://hiewandboardgames.blogspot.sg/2017/11/the-impregnable-fortress.html

FIRST GAME REVIEW ABOUT THE IMPREGNABLE FORTRESS
Had a chance to meet up with the Lion City Geeks in October 2017, for a playthrough of
The Impregnable Fortress,
here are their thoughts on the game:
​
"I think it is very safe to say that game should be included on the shelves of every boardgame collector or even in home or office, if you want to have a break and quick game with friends." - Dex

"I think this is one of those games that make very good party gifts for like Christmas Exchanges or birthdays. This could also be easily be pulled out and played as a guest entertainer for casual events as well. I think this is a game that would easily find itself being played over and over again once you get the mechanics of it." -Larhvin DeShadow

​"History teachers would surely love a game like this. The QR codes on the cards that expand on that card’s title would surely be a big draw as a more interesting way to teach students about the period. People who like games with lore would also enjoy it for the same reason. Other than that, anyone looking for a simple but fun game."
- Bryan Khoo, game reviewer
Minister for Education, Ng Chee Meng,
posting about Guardians of the City on his Facebook. 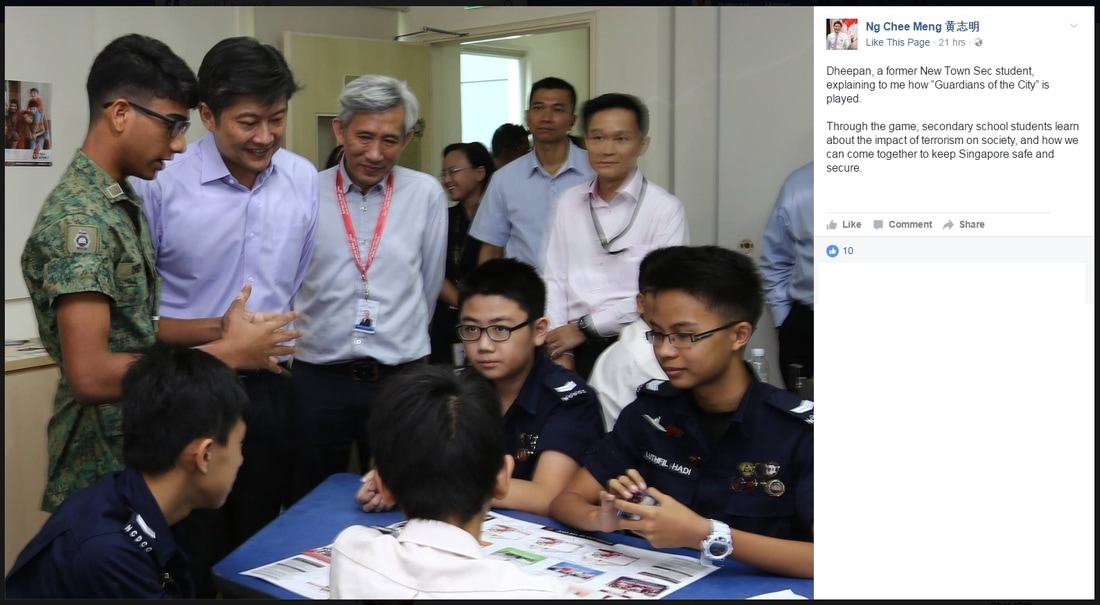 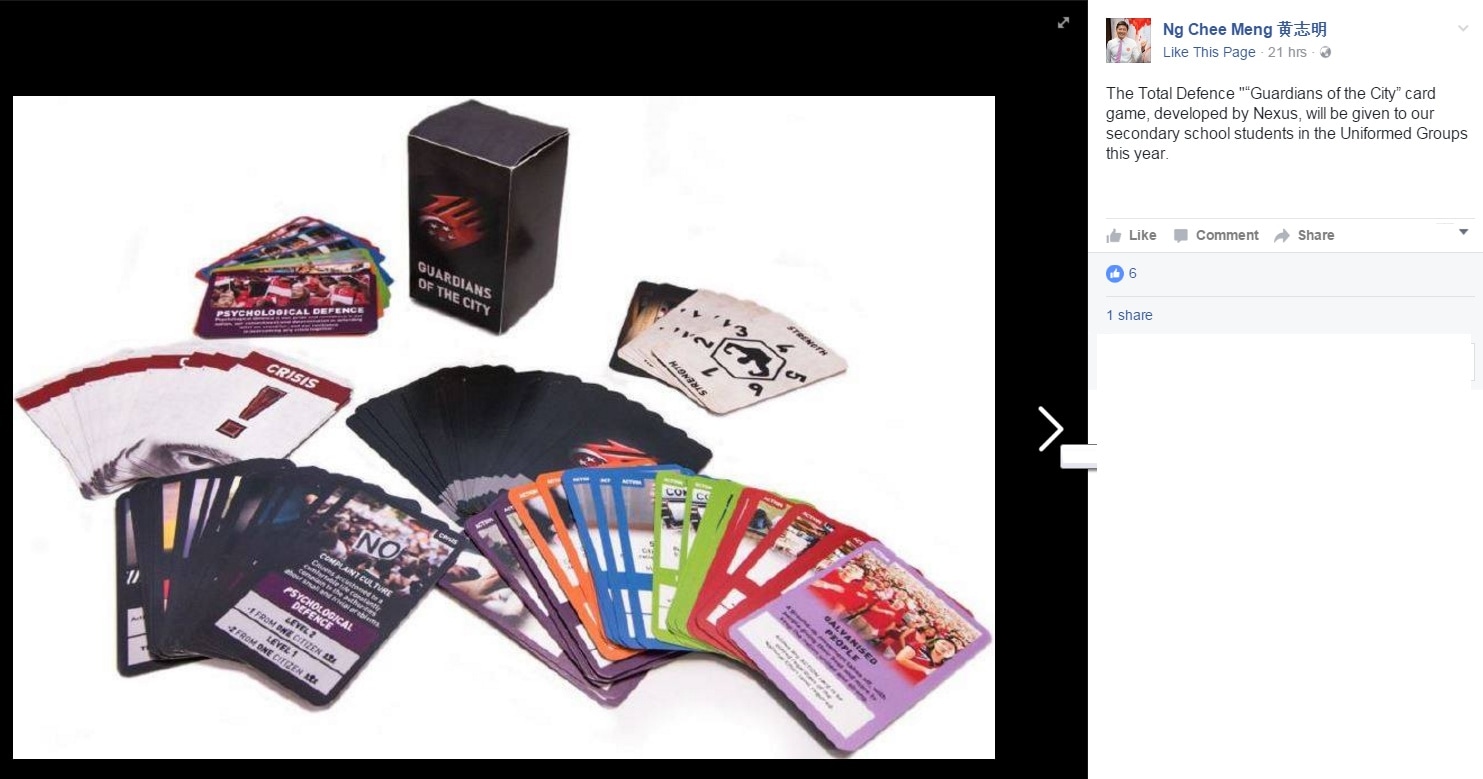 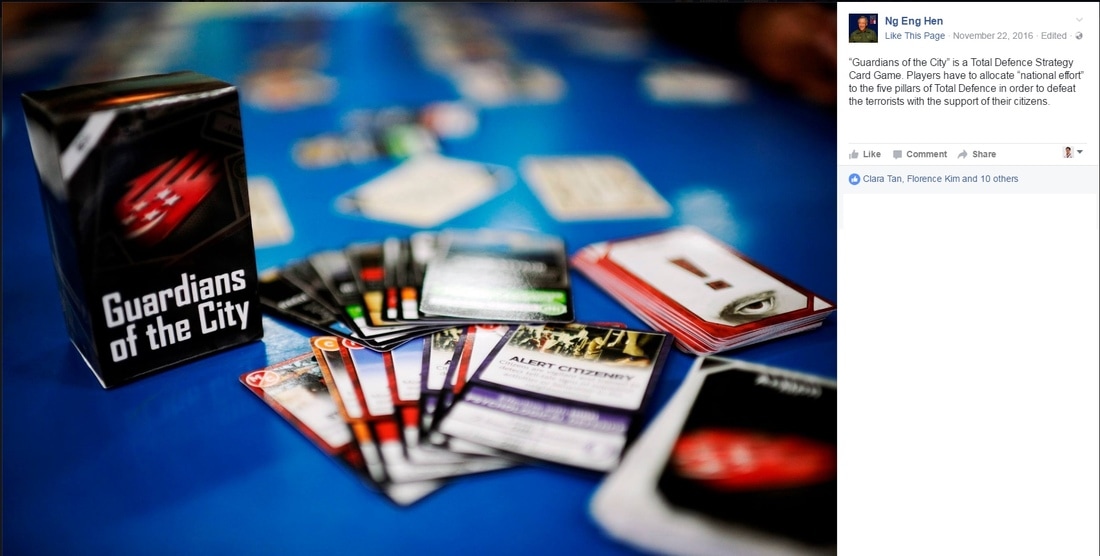 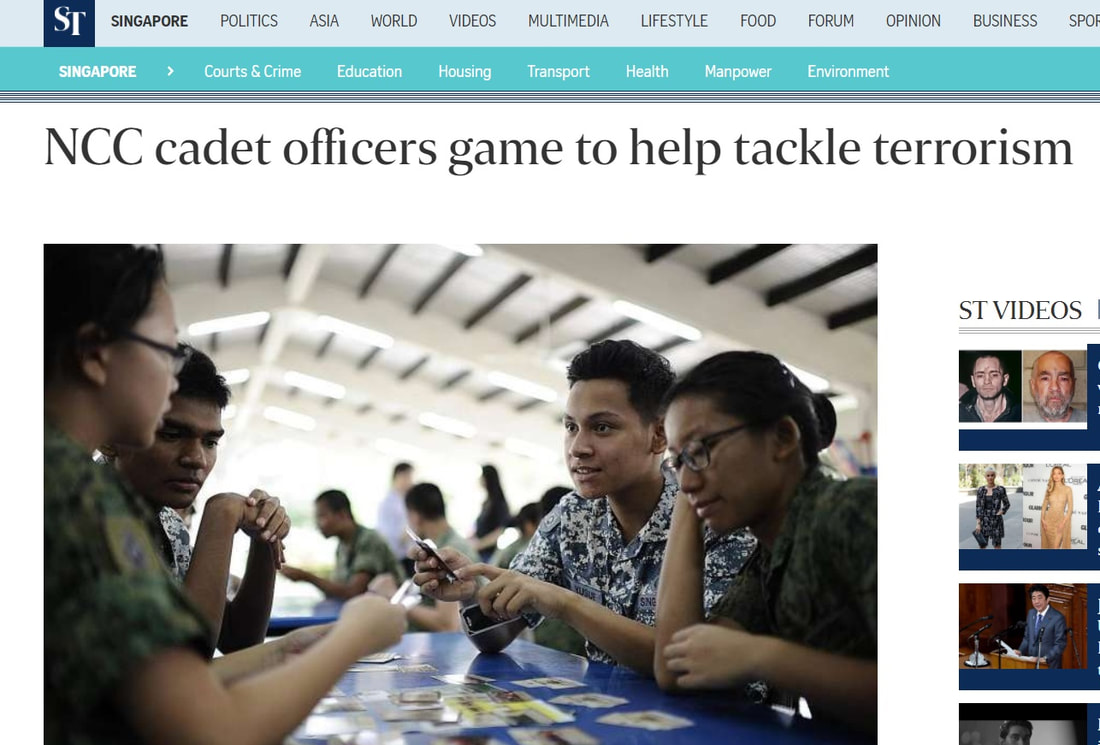 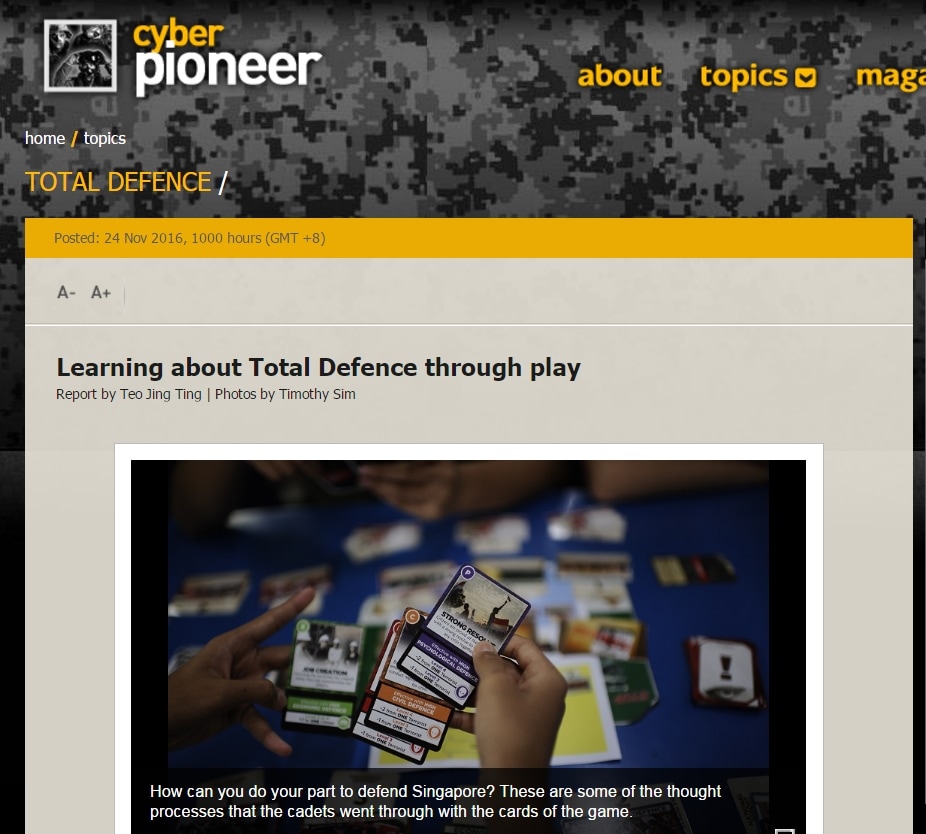 The Straits Times featuring the development of the game. 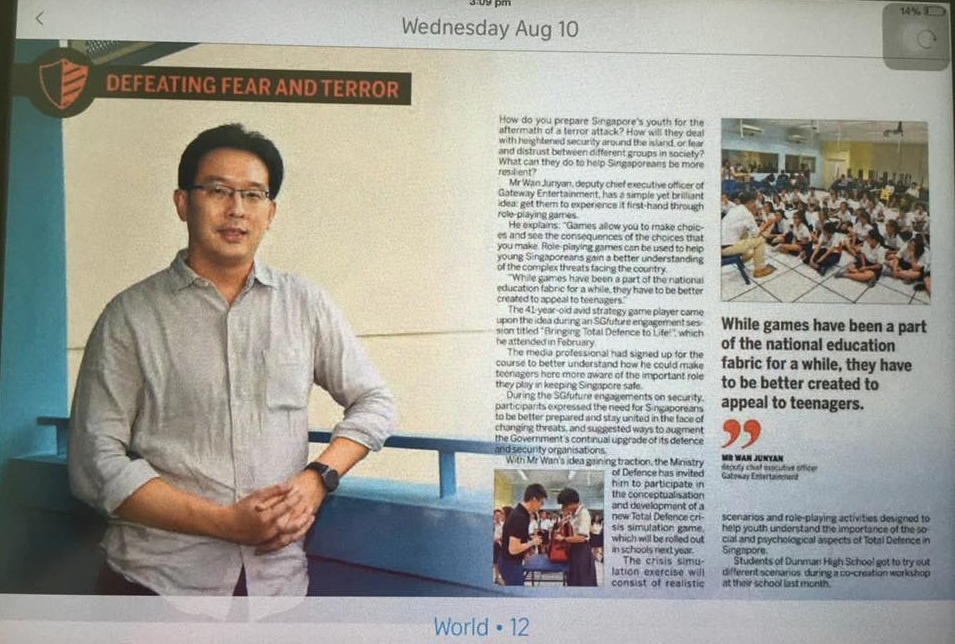 www.straitstimes.com/singapore/gearing-up-for-crises-by-role-playing
Development of the Total Defence game being featured as part of SGFuture. 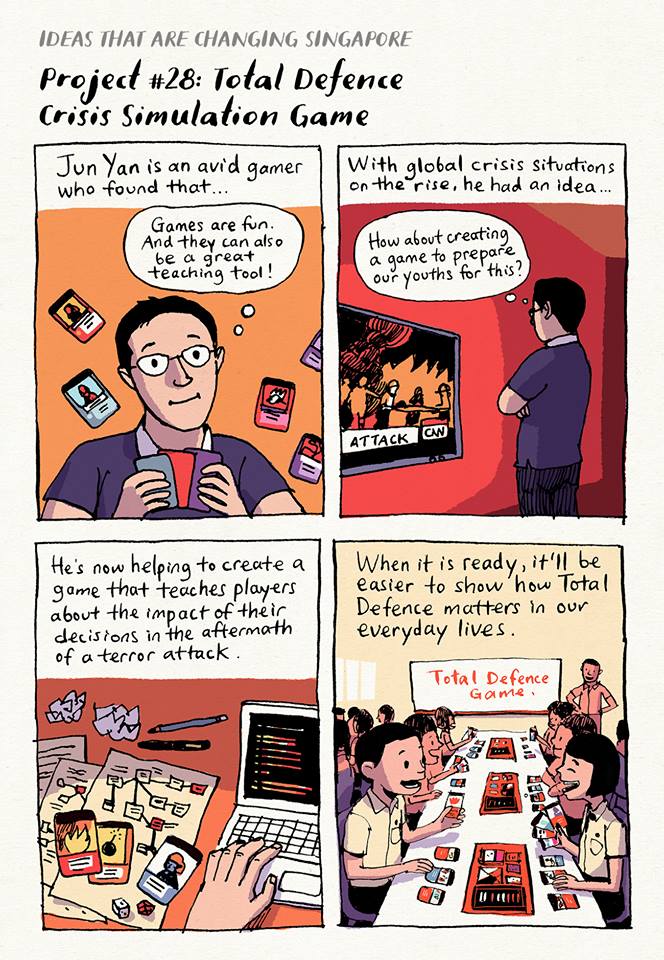 A shoutout from Dr Maliki Osman regarding a co-creation workshop with Dunman High students to develop the Total Defence game.