The HMS PRINCE OF WALES 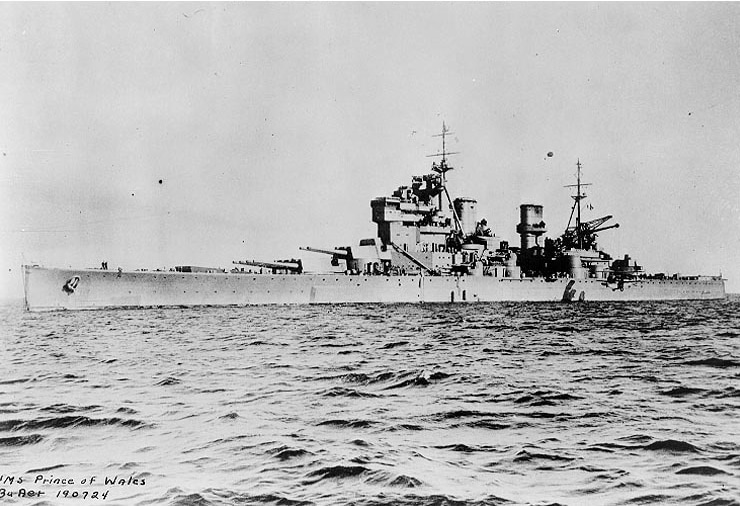 Official U.S. Navy Photograph, now in the collections of the National Archives.
Source: http://www.history.navy.mil/photos/sh-fornv/uk/uksh-p/pow12.htm
HMS Prince of Wales was a King George V-class battleship of the Royal Navy, built at the Cammell Laird shipyard in Birkenhead, England. She was involved in several key actions of the Second World War, including the May 1941 Battle of the Denmark Strait against the German battleship Bismarck, operations escorting convoys in the Mediterranean, and her final action and sinking in the Pacific in December 1941.​

Prince of Wales had an extensive battle history, first seeing action in August 1940 while still being outfitted in her drydock, being attacked and damaged by German aircraft. Her brief but storied career ended 10 December 1941, when Prince of Wales and battlecruiser HMS Repulse became the first capital ships to be sunk solely by air power on the open sea, a harbinger of the diminishing role this class of ships was subsequently to play in naval warfare. The wreck lies upside down in 223 feet (68 m) of water, near Kuantan, in the South China Sea.

For more information about the HMS Prince of Wales, please see this article by the National Library Board:
​http://eresources.nlb.gov.sg/infopedia/articles/SIP_225_2005-01-09.html?s=prince%20of%20wales 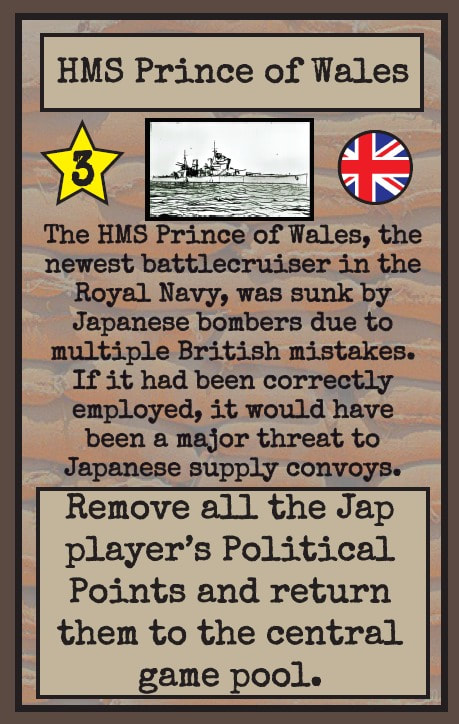 Card: Commonwealth
Supply cost: 3
Game effect: When played, this card allows the Commonwealth player to take all of the Japanese player's Political Point tokens and return them to the central game pool..
© COPYRIGHT 2017. ALL RIGHTS RESERVED.