Before the outbreak of World War 2, British strategists in London assumed that tanks could not operate in Malaya, due to the dense jungle terrain, as opposed to open European plains which were considered ideal "tank country". As a result, no tanks were deployed to the defence of Singapore and Malaya, despite the insistence by General Percival that at least two armoured regiments were required to oppose Japanese landings in northern Malaya. By 1941, situation was even worse, where the British Army had lost a large number of tanks in northern France the year before, when the British Expeditionary Force was forced to hastily evacuate from Dunkirk as the German Army closed in on it.

By December 1941, Britain was locked in a fierce contest with the German Afrika Corps in north Africa, and almost all available tanks were sent there because it was an active warzone, and furthermore the desert was considered perfect tank country. By the time the Japanese invaded northern Malaya, the British only had anti-tank guns to oppose Japanese armour.

In early 1942, however, a British armoured brigade was hastily sent to Burma to oppose Japanese movements threatening India. This brigade, part of the famous 7th Armoured Division, the "Desert Rats" which fought against the Afrika Corps, was never historically involved in the fighting in Malaya.

In The Impregnable Fortress, this political card postulates an alternative history scenario - what if the 7th Armoured Brigade was assembled earlier and had been sent to Singapore instead of Burma? Could it have turned the tide of the battle?
​ 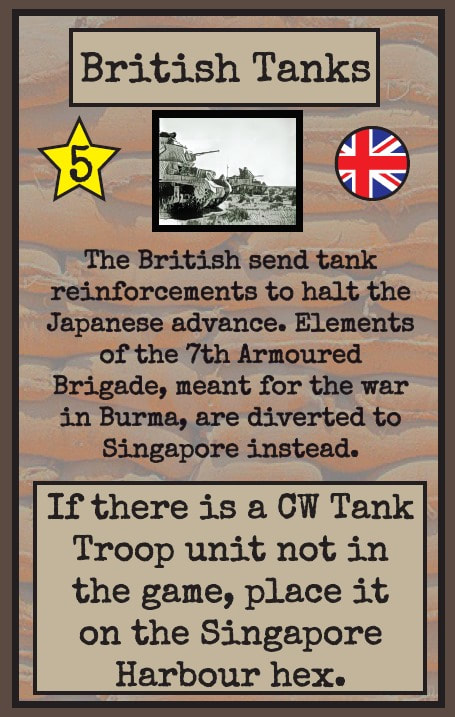