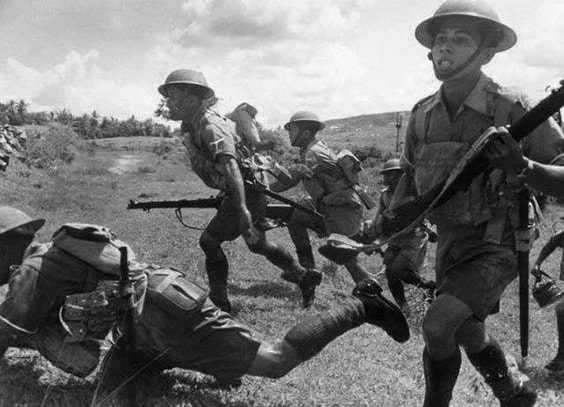 The Malay Regiment in action.
Copyright: Associated Press
The Malay Regiment was formed in March 1933, a British Army unit that recruited locals from Malaya. It had insignia and dress uniforms incorporating elements of local culture, but was otherwise a frontline combat unit which quickly proved its worth. It started as an Experimental Company, but by October 1938 had reached battalion strength. The Regiment had a reputation for marksmanship, and in 1938, at a Bren gun course in Singapore, the top four shooters were all Malay cadet officers from the Malay regiment. When war with Japan broke out, the Malay Regiment fought right to the end, making its most famous stand in the Battle of Singapore.

The Battle of Pasir Panjang, also known as the Battle of Opium Hill or the Battle at Bukit Chandu, lasted from 13 to 14 February 1942 and it was during this battle that the Malay Regiment gained its reputation for courage, heroism and loyalty, as many of its men were killed in their defence of the Pasir Panjang Ridge. Lieutenant Adnan Saidi, commander of Platoon No. 7 of C Company, 1st Battalion, was one of those who perished during the Battle of Pasir Panjang. Although he was seriously wounded during the attack, Adnan and his troops refused to surrender, and fought the Japanese to the very end. When he was captured by the Japanese, Adnan was shot, bayoneted and his body hung by his legs from a tree.

In 1992, the year of the 50th anniversary of Singapore’s fall to Japan, letters were sent to The Straits Times calling on Singaporeans and the government to remember and memorialise the valour and courage of the Malay Regiment in their defence of Opium Hill (Bukit Chandu). A number of Malay Singaporeans asked for a colonial bungalow at the top of the hill to be turned into a museum to commemorate the men’s bravery. The bungalow at 31K Pepys Road was subsequently refurbished and converted into a World War II interpretive centre by the National Archives of Singapore and the National Heritage Board.

Known as Reflections at Bukit Chandu, the centre was officially opened on 15 February 2002, the 60th anniversary of Singapore’s surrender to the Japanese. Artefacts sourced from private collectors as well as those loaned from the relatives of former soldiers, such as uniforms, cast-iron helmets and even a Vickers machine gun, are on display at the centre.

For more information about the Malay Regiment, please see this article from the National Library Board:
http://eresources.nlb.gov.sg/infopedia/articles/SIP_1748_2011-01-07.html 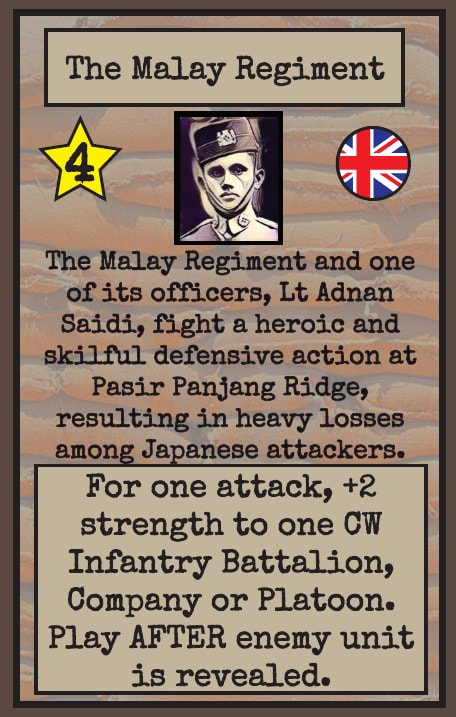