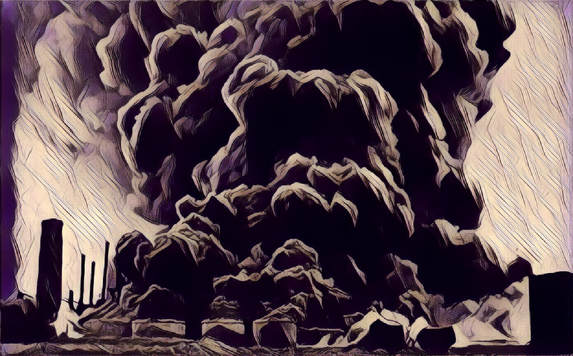 Official U.S. Navy Photograph, now in the collections of the National Archives.
Source: http://www.history.navy.mil/photos/sh-fornv/uk/uksh-p/pow12.htm
The Kranji Inferno was an unintentional success for Commonwealth forces during the invasion of Singapore by Japanese forces. A major oil depot at Kranji was in danger of being lost to Japanese forces when Commonwealth troops were in retreat, and Australian engineers were tasked with demolishing the depot to prevent the supplies falling into Japanese hands. After explosives were laid, they failed to detonate, and time was running out. In desperation, the engineers decided to run the oil into the Kranji river to waste it rather than have the Japanese get hold of it. Unknown to them, a Japanese force was moving up the Kranji river in boats, and as the oil floated downriver, it caught fire and created a huge inferno which incinerated many of the Japanese soldiers in the boats.
​
References:
Sinister Twilight, Noel Barber, 1968
The War Against Japan Vol.1, Maj-General S Woodburn Kirby, 1957
On the Psychology of Military Incompetence, Norman Dixon, 1976
History of the Second World War, B.H. Liddell Hart, 1971
The Fall of Singapore, Justin Corfield and Robin Corfield, 2012 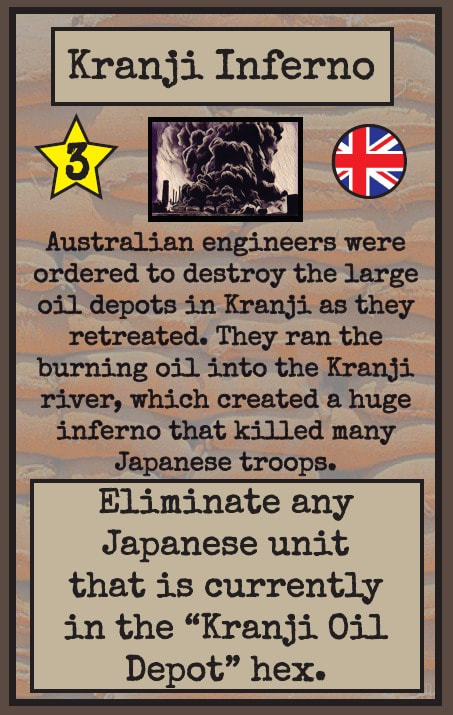 Card: Commonwealth
Supply cost: 3
Game effect: When played, any Japanese unit that is currently in the hex labelled "Kranji Oil Depot" is immediately eliminated from the game.
© COPYRIGHT 2017. ALL RIGHTS RESERVED.