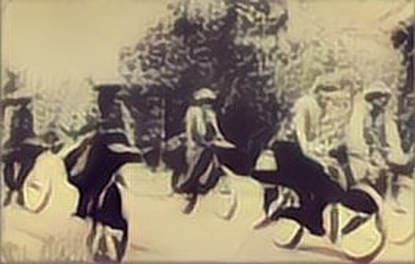 Japanese soldiers, planning for the conquest of Singapore by attacking down the Malayan peninsula, knew they had to strike fast and hard before the Commonwealth forces could dig in and bring in reinforcements. General Yamashita needed to move his forces quickly, but the lack of motor transport in Malaya posed problems. He came up with an ingenious solution - Japanese soldiers travelled down the peninsula on bicycles stolen or co-opted from locals, sometimes riding, sometimes pushing the bicycles, which were laden with enough supplies for each individual soldier.

Using this method, the Japanese forces moved much quicker than the Commonwealth forces expected, constantly arriving at battlefields while their enemies were unprepared or had not yet finished defensive preparations, and often showing up in the rear or seizing important road junctions that cut off the retreat paths of Commonwealth troops. This threw Percival's troops off balance, and resulted in a string of defeats and an unbroken retreat all the way back to Singapore. 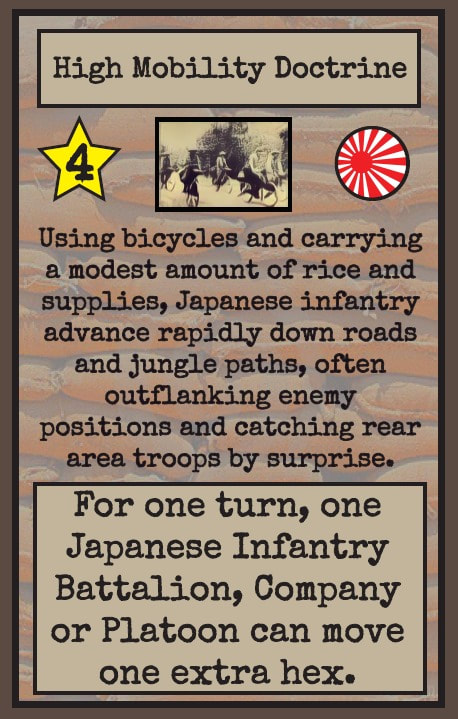 Card: Japanese
Supply cost: 4
Game effect: When played, allows the Japanese player to move one Infantry Battalion, Infantry Company, or Conscript Platoon an additional hex on top of the usual movement allocation. This means it can move two hexes when not on a major road, and three hexes on a major road. This is not a second action - the unit can still only attack once this turn.
© COPYRIGHT 2017. ALL RIGHTS RESERVED.