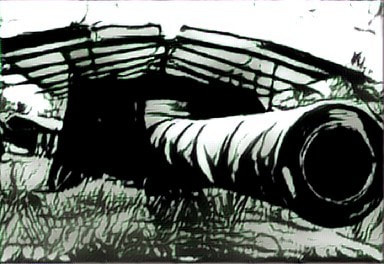 15-inch fortress gun built to defend Singapore from naval attack.
For many years, the main concern for British tacticians regarding the defence of Singapore, was to protect against enemy naval attack and amphibious invasions. To this end, huge 15-inch fortress guns were built at various locations on the island, to be used against enemy ships. These proved to be of little value when the Japanese eventually arrived by land, on the northern side of the island.

It is a common misconception that the reason for this was that the guns were "facing the wrong way". In actual fact, most of the guns could traverse 360 degrees and were able to fire on Japanese forces in Johore. The real problem lay in two main factors - firstly, as anti-ship weapons, they were primarily equipped with armor-piercing ammunition, which would have been devastating against ships, but of little use against formations of infantry. It would have been much better if high-explosive ammunition was directed against Japanese troop concentrations, but the guns were equipped with very few of such rounds.

The second problem, as reported by General Wavell to Churchill upon his inspection of the defences of Singapore, was that the anti-ship nature of the guns meant that they fired in very flat, direct trajectories, again unsuitable for use as artillery pieces against troops in Johore.

It was true that there was a small number of the guns that could not face north, but this was mostly a result of later modifications to add metal bomb shields to the top of the gun pit, to protect the guns against bomber attacks. Such guns could not be rotated to point to Johore because the bomb shields were in the way.

This card postulates an alternative history scenario where the fortress guns were stocked with a generous amount of high-explosive ammunition before the war began, allowing them to wreak havoc on Japanese invasion staging areas. 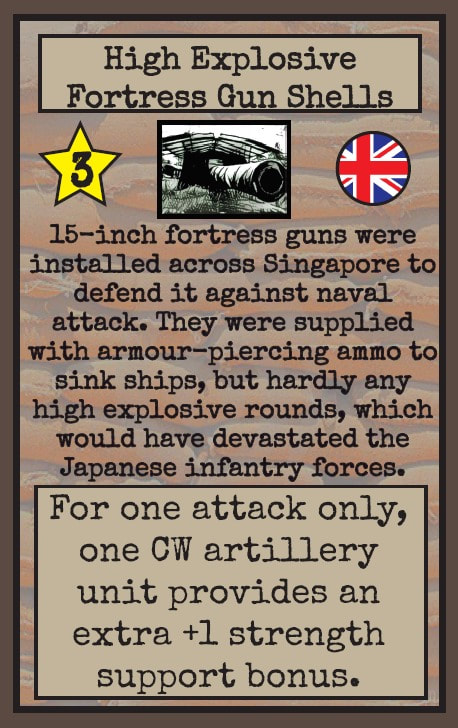