The Empress of Asia 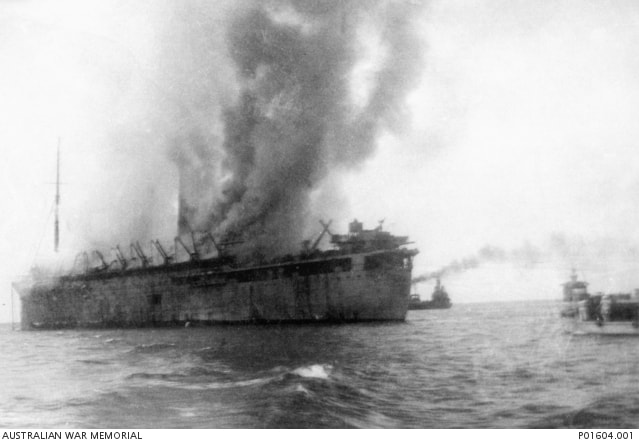 Photo of the transport ship Empress of Asia on fire
This image is Crown Copyright because it is owned by the Australian Government or that of the states or territories,
​and is in the public domain because it was created or published prior to 1967 and the copyright has therefore expired.
The British transport ship "Empress of Asia" was sunk by Japanese bombers while ferrying troops and supplies to Singapore. Critical war material was lost because of this, including weapons earmarked to equip Dalforce, and the entire complement of anti-tank guns belonging to the British 125th Anti-Tank Regiment. These guns could have played a pivotal role in stopping Japanese armour attacks, possibly leading to a different outcome of the battle.

For more information about the Empress of Asia, see this article on wikipedia:
en.wikipedia.org/wiki/RMS_Empress_of_Asia 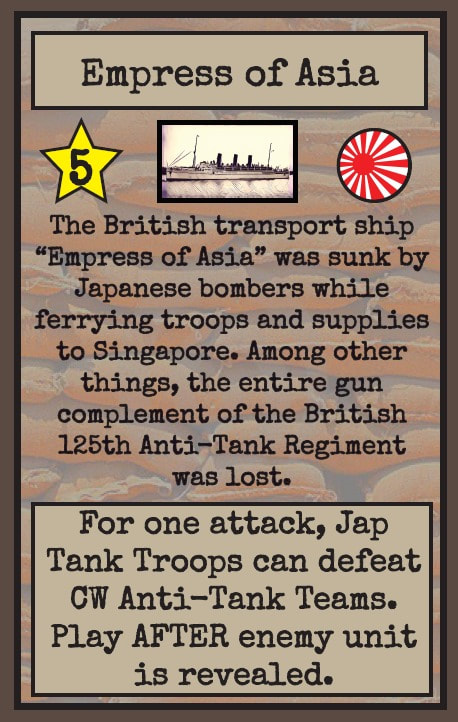 Card: Japanese
Supply cost: 5
Game effect: When played, a Japanese Tank Troop (strength 9) can defeat a Commonwealth Anti-Tank Team (strength 1), instead of the other way around. For one attack only. The Japanese player can play this card AFTER an attack is declared and the Anti-Tank Team is revealed.
© COPYRIGHT 2017. ALL RIGHTS RESERVED.