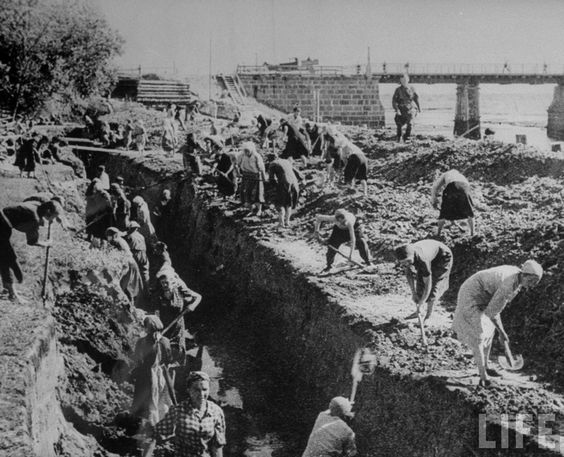 Civilian labour played important roles in many conflicts. Soviet women are shown here helping to dig trenches during the siege of Leningrad.
Photo copyright Life magazine
As Japanese forces rolled unchecked down the Malayan peninsula towards Singapore, General Percival's subordinates urged him to order the construction of fortifications on the northern coast of Singapore. In particular, the Chief Engineer, General Simson, insisted that barbed wire should be laid and trenches needed to be dug in order to allow the troops to better resist a Japanese invasion.

Percival repeatedly rebuffed such requests, refusing to allow the construction of defensive works to proceed. When an exasperated Simson finally pressed for the reason, Percival reportedly answered, "I believe that the defences of the sort you want to throw up are bad for the morale of the troops and civilians."

At this point, a horrified Brig Simson could only reply, "Sir, it's going to be much worse for morale if the Japanese start running all over the island."

By the time Percival finally relented, the situation was critical and Japanese forces were poised to cross the Straits of Johore. By then, civilian labour willing to do the work was no longer to be found, as Japanese artillery fire was already hitting the beach and Japanese bombers were attacking frontline positions.

This card postulates an alternative history scenario, where Percival agrees to the early use of civilian labour, allowing for the strengthening of Singapore's beach defences long before the Japanese arrive.