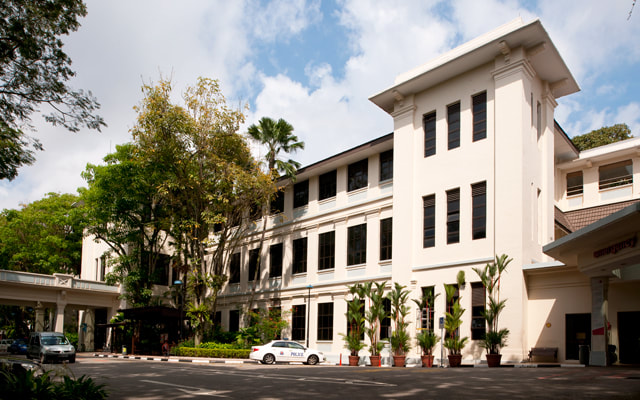 Under the command of General Tomoyuki Yamashita, Japanese soldiers crossed into Singapore on 9 February 1942. It was evident by 14 February that the island would soon be captured by the invaders.The British Military Hospital (now known as Alexandra Hospital) was caught between the advancing Japanese troops and the retreating British forces. It became the site of a Japanese massacre when between 150 and 200 staff and patients were killed on 14 February 1942.

The hospital had been under heavy Japanese shelling since the morning of 14 February 1942. At about 1:00 p.m. the first Japanese soldier was sighted approaching the building.  A British officer walked out to meet him while pointing to his Red Cross arm band as an internationally recognised symbol to protect military medical personnel during armed conflicts.The Japanese soldier ignored this and fired at the officer but failed to hit him. The officer ran back inside but by then more Japanese soldiers had surrounded the hospital.

For about one hour, three large groups of Japanese soldiers attacked the hospital. They went from room to room shooting, bayonetting and beating up doctors, orderlies and patients indiscriminately. They even killed an anaesthetised patient who was still lying on the operating table. About 50 men were killed in this first round. Around 3:30 p.m., 200 men were rounded up, tied into groups of eight and forced to march toward a row of buildings some distance from the hospital. The gravely injured were not spared and were killed if they fell along the way.

Upon reaching their destination, which was a row of outhouses, the men were divided into groups of 50 to 70 people and crammed into three small rooms. There was no ventilation and they lacked water. They had neither space to sit nor lie down. Under these terrible conditions, some men died during the night. The following morning, the remaining men were told that they would receive water. By 11:00 a.m. the Japanese captors allowed the prisoners to leave the rooms in groups of two on the pretext of their fetching water. However, as the screams and cries of those who had left the rooms could be heard by those still inside, it became clear that the Japanese were executing the prisoners when they left the rooms. The death toll numbered approximately 100 prisoners.

Suddenly at this time, Japanese shelling resumed and a shell struck the building where the prisoners were being held. This interrupted the executions and allowed a handful of men to escape.

The most widely accepted explanation for this massacre is that Japanese soldiers were after a group of retreating Indian soldiers who had been firing at them from a location near the hospital. Another explanation given is that the massacre took place in the heat of battle. Some maintain that the massacre happened because the Japanese troops wanted to avenge their fallen comrades.
​
For more information on the Alexandra Hospital Massacre, see the following National Library Board article:
eresources.nlb.gov.sg/infopedia/articles/SIP_2014-04-07_090735.html?s=alexandra%20hospital